DJ Khaled’s Commitment to Reggae is Hype and Success for Mary J. Blige

DJ Khaled, arguably one of Reggae and Dancehall’s biggest Ambassador’s of the genre in the Rap and mainstream space, has succinctly proven the genre’s cultural worth with the release of his newest production; Mary J. Blige’s “Amazing.”

Sampling Dawn Penn’s famous hit, “No, No, No,” Khaled achieves maximum impact and hype in getting the attention of Reggae aficionados while securing the ear of R&B fans who are anticipating the unmistakable vocals of the Queen of Hip Hop-Soul, Ms. Mary J. Blige.  If a song can be used as an example of a successful sonic formula (Reggae foundation + Americana Soul = hot record), “Amazing” is it.

The platinum-selling, chart-topping singer appeared on camera in a behind-the-scenes clip on social media (watch the clip here) in which she shares the excitement of DJ Khaled who loves the finished mix and master of “Amazing.”  Given the number of hit records Mary has released throughout her career, we should take her cue that this track will be successful too.

Khaled, with his long history with Reggae, seized an opportunity to bring two worlds together (again), and brings Mary to the fore with a statement interpreted as ‘not only are we going to please music lovers in the U.S., we are going to gain the hearts of music lovers in Jamaica, the Caribbean and her diaspora.’

Appearing on The Tamron Hall Show, Mary commented “I’ve earned the right to feel ‘amazing’” and when asked about her forthcoming album she said “wait ‘til you hear it.  It’s going to blow everybody’s mind.”

In the past week the Mary has released “Good Morning Gorgeous,” and “Amazing.”  “Diamond Life” was released in late November in which she is the featured artist appearing alongside Snoop Dogg and DJ Cassidy.  The common thread weaving all three songs together (in addition to Mary’s voice) is self-assurance.  Mary describes this as being “sure; not cocky or arrogant, just sure.” 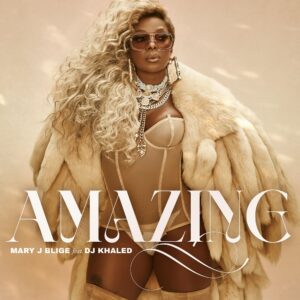